New Year’s day did not exactly arrive according to plan (but does anything, ever?)

My plan was to usher in 2019 with a kiss under the fireworks beside the Boston Harbor. I had been plotting this New Year’s eve for nearly three years…since the last time I stood beside the harbor, under the fireworks and (sadly) only dreamt of a kiss. Unfortunately, the weather – and my boyfriends digestive system – had other plans.

Instead of the romantic evening, filled with talk of our dreams, goals and aspirations for the future I had envisioned, I spent the last hours of 2018 carrying the heaviest bag of vomit I’ve ever handled through the rain to a roadside trashcan and cleaning out a bucket filled with significantly less vomit. But hey, in sickness and in health, right? 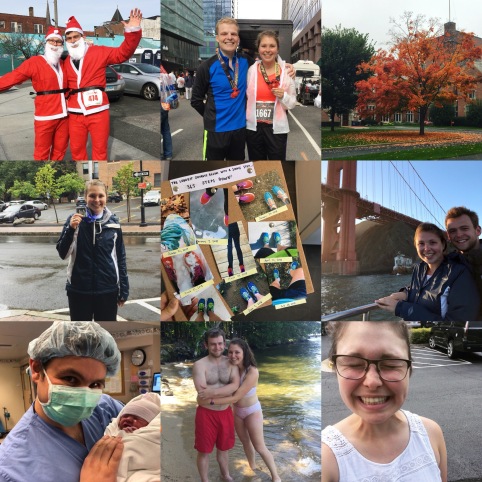 Anyway, those last couple hours – as gross and unglamorous as they were – in no way define my year. In fact, there was less vomit in my 2018 then in any year of mine since 2010 (good bye Bulimia!) This year was my first full year out of school, the year I officially became a dietitian, the year I broke 4 hours in the marathon, the year I (sadly) watched my MA license shred in front of my eyes, the year I drove well over 30,000 miles…

In short it was a roller coaster with ups and downs but a net gain of friends, family, love, career goals and many, many stories. In other words, my last few hours (the vomit-filled ones) those don’t define 2018.

So far, I’ve run less miles than there have been days despite my goal of qualifying for Boston (did I just put that in print…) I haven’t turned on my stove once despite by goal of trying a new recipe each week (thank you The Soup Girl for tonight’s dinner). In my 2019 journal there are far more “to dos” then check marks, and you know what? That doesn’t mean I failed! That doesn’t mean I can’t meet my goals to bring Werth Your While to bigger and better things…so keep a look out! Things will be changing (and growing) around here.

Reaching a goal does not require perfection. Instead, it requires you to get back up when life takes you down and keep on trying.

Please join us for a free event for parents just like you! We will be diving in to techniques and strategies to better support your child during challenging meals, stressful situations and eating disorder meltdowns. We will also have plenty of time to discuss your current struggles and stresses as a parent of a child in treatment for an eating disorder.

Hi! I’m a Registered Dietitian, writer, runner and New England native who specializes in helping people reestablish their relationship with food and believes that all foods can fit in a healthy lifestyle!

Life with ED, the Podcast is available on Spotify, iTunes, SoundCloud and google play. Check it out, rate it, leave a review and subscribe!

If you’re interested in working with us as a client or patient please contact Julia via email at werthyourwhilenutrition@gmail.com.

With any comments, concerns, stories or ideas for future podcasts or blog posts also contact Julia at werthyourwhilenutrition@gmail.com